Earlier this year, hubby and I received a gift voucher to spend two nights down in Anglesea as a thank you from a friend for helping her out and we decided to do a road trip of the Great Ocean Road, as we hadn’t done all of it before.

Driving from Melbourne, it is about 1 hr 20 min drive and is a pleasant, easy one too. We checked in on the Friday night at the Great Ocean Road Resort which is a nice place which has everything you need; shower, kitchenette, living room and a comfy bed. As we had checked in so late, we went for a short drive along the coast to watch the (full) moon rise over the water. This in itself was a tricky endeavour as there are no real viewing areas around Anglesea – but hubby being the amazing man that he is, managed it! Afterwards, we walked to the local servo for some snacks, plonked ourselves on the sofa and watched the footy.

The next morning we were up bright and early to begin our big adventure; 365km of driving along the Victorian Coast from Anglesea to the Twelve

Apostles, and back home again!

First stop; Airey’s Inlet! If you grew up in Australia in the 90’s, you would be all too common with a tune asking, “Have you ever, ever felt like this?” and yes, I was going to see the iconic lighthouse from ‘Round The Twist’. Split Point Lighthouse was only a 15 minute drive from our resort and we stopped here for a bit of a walk around, while playing the theme song (embarrassing my husband tremendously). Along the walkways there are some amazing views of the cliffs. Definitely worth a visit.

Next, Lorne! Just before entering Lorne, you officially join the Great Ocean Road trail. As we had left Anglesea so early, nothing was open to grab some brekfast, so we drove around Lorne and then found a busy cafe to grab some brekkie before the next big drive.

Kafe Khaos is where we chose as it seemed popular and the menu wasn’t as crazily priced as some of the other cafes along the main walk. We each grabbed an egg brekkie roll while I had a hot chocolate and hubby had a coffee. While at breakfast, we had a friendly visitor in the form of a local Cockatoo. I christened him Glenn.

After brekkie, we drove down to the local pier and had a leisurely stroll overlooking the water, watching some people go about their day fishing. 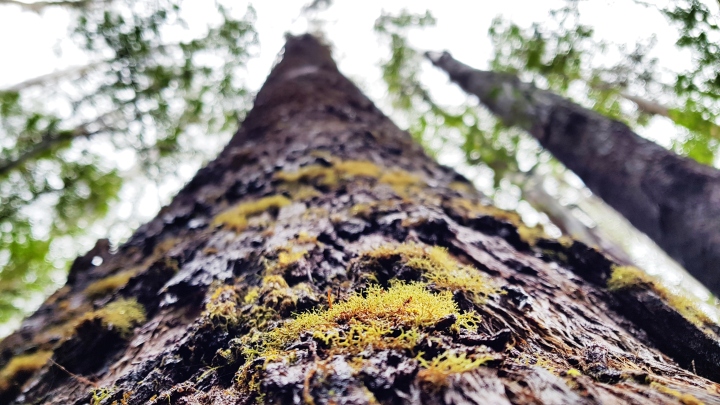 Then it was on to the Great Otway National Park to see Erskine Falls! Now, thankfully I had worn runners and leggings on this trip, because there was SO. MUCH. WALKING! The first stop was no exception, with sooooo many slippery steps to walk down to see Erskine Falls but the climb back up was another story…. Soooooooo much stopping which proved how unfit I really was. Erskine Falls was a spectacular sight, which was so lush and green. I could have spent hours here exploring the surrounds, but my hubby wanted to keep on moving… 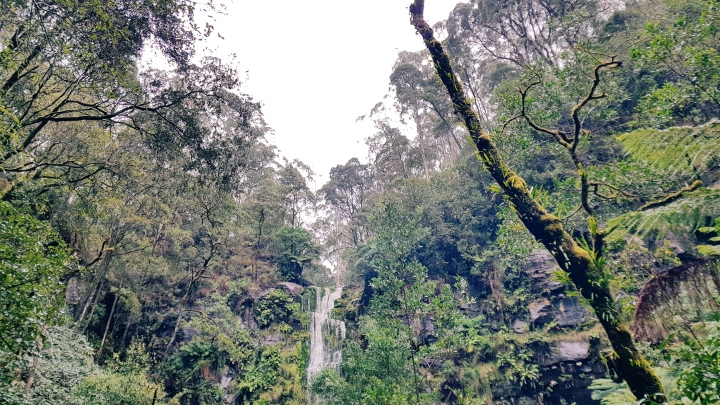 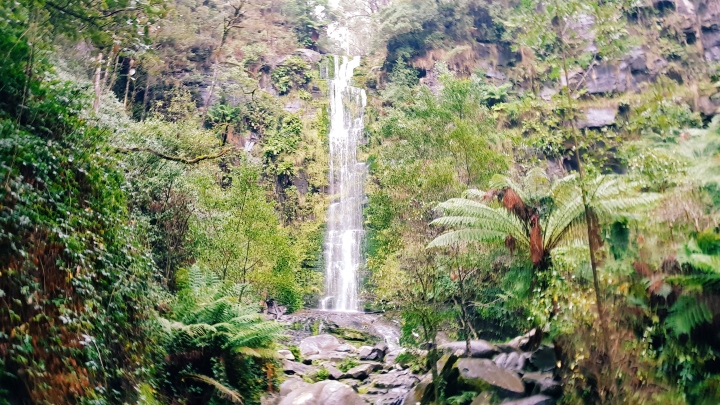 After the painful walk back up all those stairs, it was time to venture to the Otway Fly Treetop Walk. This is advised to allow 2 – 2.5 hours to walk, and they weren’t wrong. There is so much walking here, up and down hills and slopes, up stairwells and across mind boggling bridges. 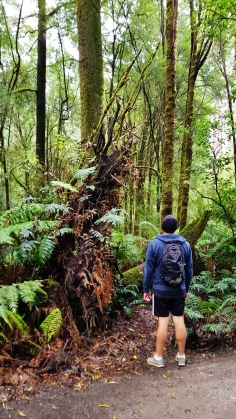 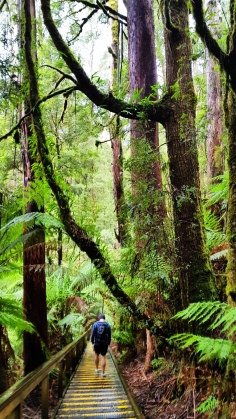 There is one part of the walk which has a long platform, but nothing to support the other end. My husband refused to walk out to it but I did and it is not for the faint of heart… it moves so much!!!!

This is a must-see along the tour of the Great Ocean Road, as photos just do not do it justice! (Though be warned, the drive up here is possibly the scariest road we have driven on as it is one lane for both sides of traffic!!!)
On the way to the Gibson Steps, we stopped for a very late lunch at The Roadhouse which was a combination of a cafe, convenience store and pub. Though we were iffy whether or not to stop, we are so glad we did. The good was amazing and reasonably priced and they were absolutely lovely there.

At Gibson Steps, it is a steep decent down the side of a cliff with built in steps – very narrow and very crowded! 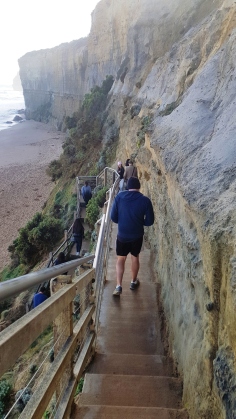 After the steep climb back, we ventured off to Loch Ard Gorge to see a few other attractions. These areas were LOADED with tourists and made walking around a bit difficult. There were even tourists jumping the safety barriers to take ‘Instagram Shots’ but far too risky for me.

Last stop before the long drive back home, was to the famed Twelve Apostles. After driving forever, with crappy signage and getting lost, then fighting through hundreds of tourists, we get to the “12” Apostles, which should really be renamed to the ‘seven-and-a-half-Apostles. Just sayin’! 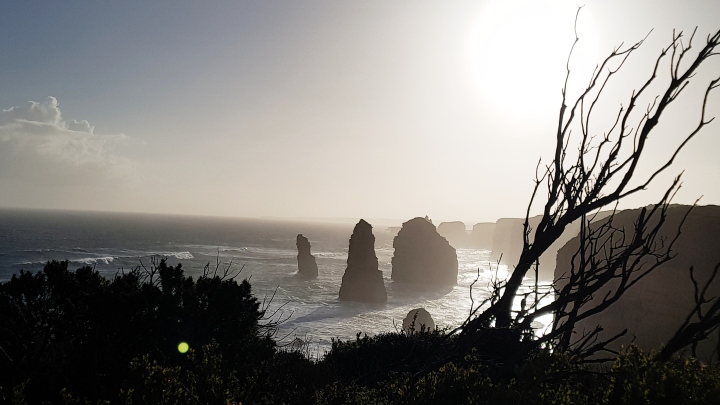 Overall, hubby and I had a great mini adventure getting away for the weekend, taking in a lot of the local sights along our great coastline. It was a lot to fit in to one day, but would do it all again just the same.

Welcome to The Karissa Diaries

Welcome, my name’s Karissa and this is my blog of travel and food! I am always wishing I was somewhere else and am constantly planning my next adventure; whether it is a day trip or a month away, I am always searching. Follow along on each adventure I take, whether it’s a solo trip, coupled with my hubby, or a family trip with my furbabies!
🌘
☁️
💨
My happy place 🌼
Go out to watch the eclipse, end up stargazing 💫
📌Port Willunga, Adelaide (Aka my happy place)
📌Queenstown, New Zealand
Have to make memories any chance you can 📸
☀️🌺🌊
Some highlights from our time down in the South Island of New Zealand #travelawesome #travelingram #traveladdict #travellerslife #roadtrip #
📌 Lake Pukaki, New Zealand
Sun Halo while in Queenstown 🌈
📌 Rotorua, New Zealand
💜
📌 Waitomo, New Zealand
🌊
✨

Welcome, my name’s Karissa and this is my blog of travel and food! I am always wishing I was somewhere else and am constantly planning my next adventure; whether it is a day trip or a month away, I am always searching. Follow along on each adventure I take, whether it’s a solo trip, coupled with my hubby, or a family trip with my furbabies!

Follow The Karissa Diaries on WordPress.com
Join 174 other followers