Melbourne; continuously voted the world’s most livable city for a reason (7th year in a row I might add).

There is so much to see and do within Melbourne, it really is a hub of different cultures and personalities. You can find any food you could ever want or need due to the rich diversity of the city, be brave enough to express yourself through your wardrobe without being (too) judged, and attend an array of sporting events throughout the year. Sure, Melbourne’s main drawback is the unpredictable weather (literally can have four seasons in one day, heck, even within one hour in some experiences), but it is what sets itself apart from all other cities within Australia.

I moved to this grand city ten years ago, and have loved it ever since. The one thing I loved immediately when moving here was AFL. The Australian Football Leagues is a fast and tough game with players on opposing teams basically running a ball – similar to that of an NFL ball – and handballing or kicking it to teammates with the main aim of trying to kick a ball through two large goal posts which awards 6 points to that team, or 1 point if they get it through either of the two side posts. The main season runs during the Australian Winter (March – September/October) competing each week to make it to the finals then become premiers. My team is Essendon Bombers and I have been supporting them since I went to my first game in 1999. I remember after that game getting the chance to go down to the change rooms and meeting a few legends such as Matthew Lloyd, Damien Hardwick, and my then big love, Mark McVeigh.

You cannot visit Melbourne and not experience a sporting event at the MCG (Melbourne Cricket Ground) or ‘The G’ as it is affectionately referred to by the locals, whether it’s AFL during Winter, or cricket during Summer, you have to see this majestic stadium in all her glory. There is also a wide range of other sporting events which take place within Melbourne, such as the Melbourne Cup, the Australian Open, the Australian Masters, F1, rugby, soccer…. there is plenty to do if you’re a sports nut!

As mentioned before, Melbourne is an extremely diverse city in terms of culture, and that is on full display throughout the city and surrounding suburbs. You can find anything you could possibly need food-wise, from Italian, Indian, African, Sri Lankan, Turkish, Lebanese to Thai, Chinese, Japanese, Vietnamese and everything in between. I personally love Thai (Caroline Thai in Caroline Springs makes the most amazing Thai food) and eat it whenever I can! My favourite pizza in the whole world is from Moonee Ponds Pizza in (you said it) Moonee Ponds, which is the Farmers Pizza – chilli, potatoes, bacon and cheese and I add pineapple – and it is so mouthwatering-ly good! I have been going to Moonee Ponds Pizza since I was a kid, and is our ‘go-to’ place when having dinner out as a family with my dad.

There are numerous events and festivals held in Melbourne each year, from Moomba, to the Royal Melbourne Show, and an abundance of international and local artists performing. I have managed to see live; Billy Joel, Kylie Minogue, HIM, Bon Jovi, ACDC, The Fray, Anberlin and Paramore just to name a few.
Not only is there a lot to do within Melbourne, there is also a plethora of things to do outside of Melbourne. Take a roadtrip somewhere (Great Ocean Road, Lakes Entrance, Lorne, Geelong, Torquay, Phillip Island…) and go to a spa, or the beach, or take a hike. You will never be out of options with things to do here, it really is the world’s most livable city (now, just get the train’s to run on time and I won’t complain at all!). 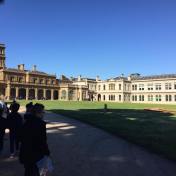 Welcome to The Karissa Diaries

Welcome, my name’s Karissa and this is my blog of travel and food! I am always wishing I was somewhere else and am constantly planning my next adventure; whether it is a day trip or a month away, I am always searching. Follow along on each adventure I take, whether it’s a solo trip, coupled with my hubby, or a family trip with my furbabies!
🌤
🌅
Hanging out with my Daisy 🌼
🍬
💙💜💕🧡
Last night 🏉
🌩
Yesterday was a big bucketlist tick for me; woke up super early to attend the ANZAC Day Dawn Service at the Shrine of Remembrance followed by the ANZAC Day clash at the mighty @mcg to watch @essendonfc take on @collingwood_fc ! Was a great day back in @cityofmelbourne before heading back home🌹#untilnexttime
La vie est un sommeil, l’amour en est le rêve
Morning rituals 🌊
Monday morning walk 🌊
Lunch views today 👌🏻
Happy 17th birthday to my best friend and little bro @marcusmisiano
Afternoon swims 🧿
There is no one else I could imagine living this lifetime with 💕🧿 happy 17 years!
And just like that… 17 years with my best friend 💕
Happy 7 years 💍 I love you @lukesparker
Morning cuddles 🥰

Welcome, my name’s Karissa and this is my blog of travel and food! I am always wishing I was somewhere else and am constantly planning my next adventure; whether it is a day trip or a month away, I am always searching. Follow along on each adventure I take, whether it’s a solo trip, coupled with my hubby, or a family trip with my furbabies!